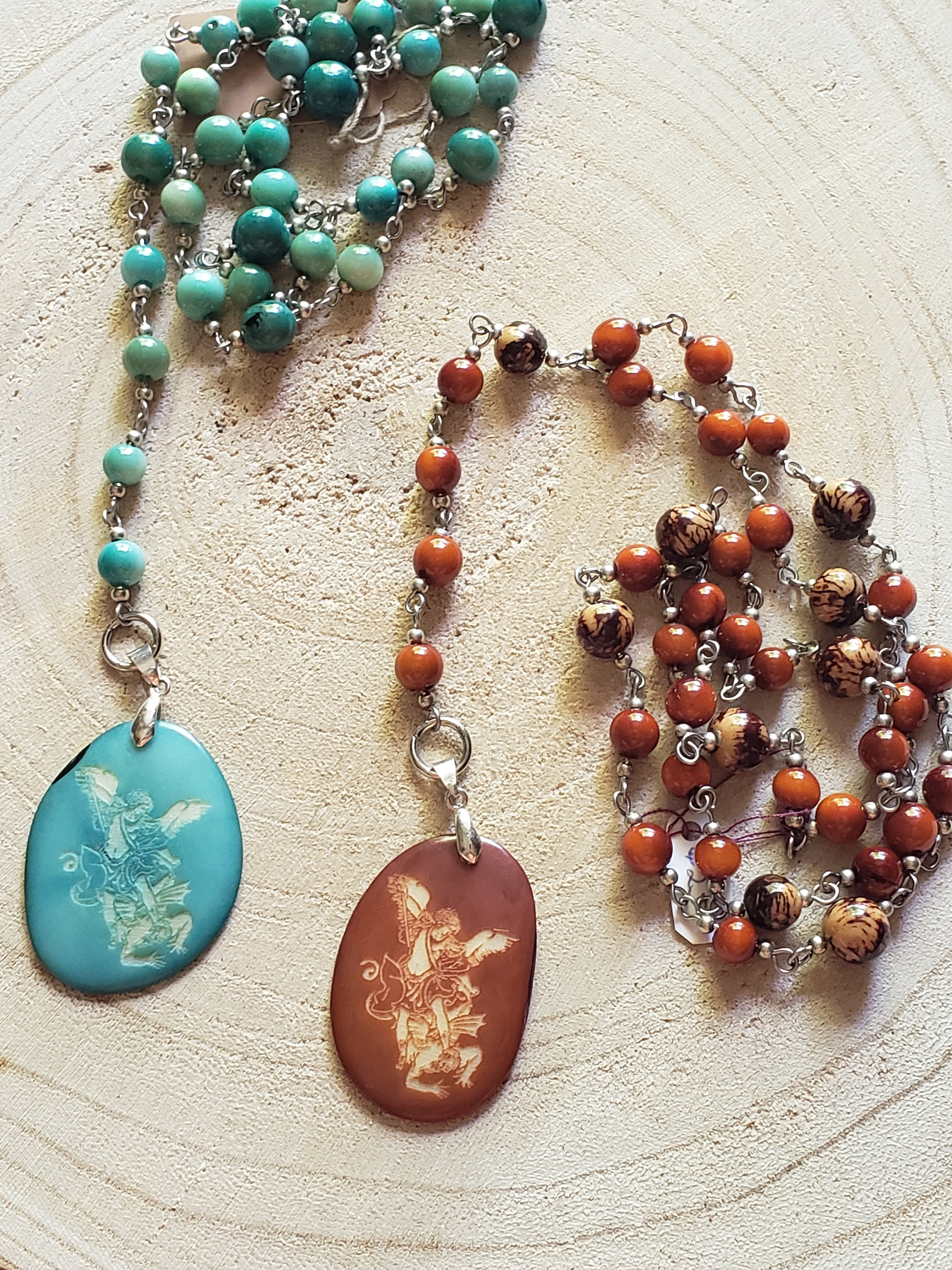 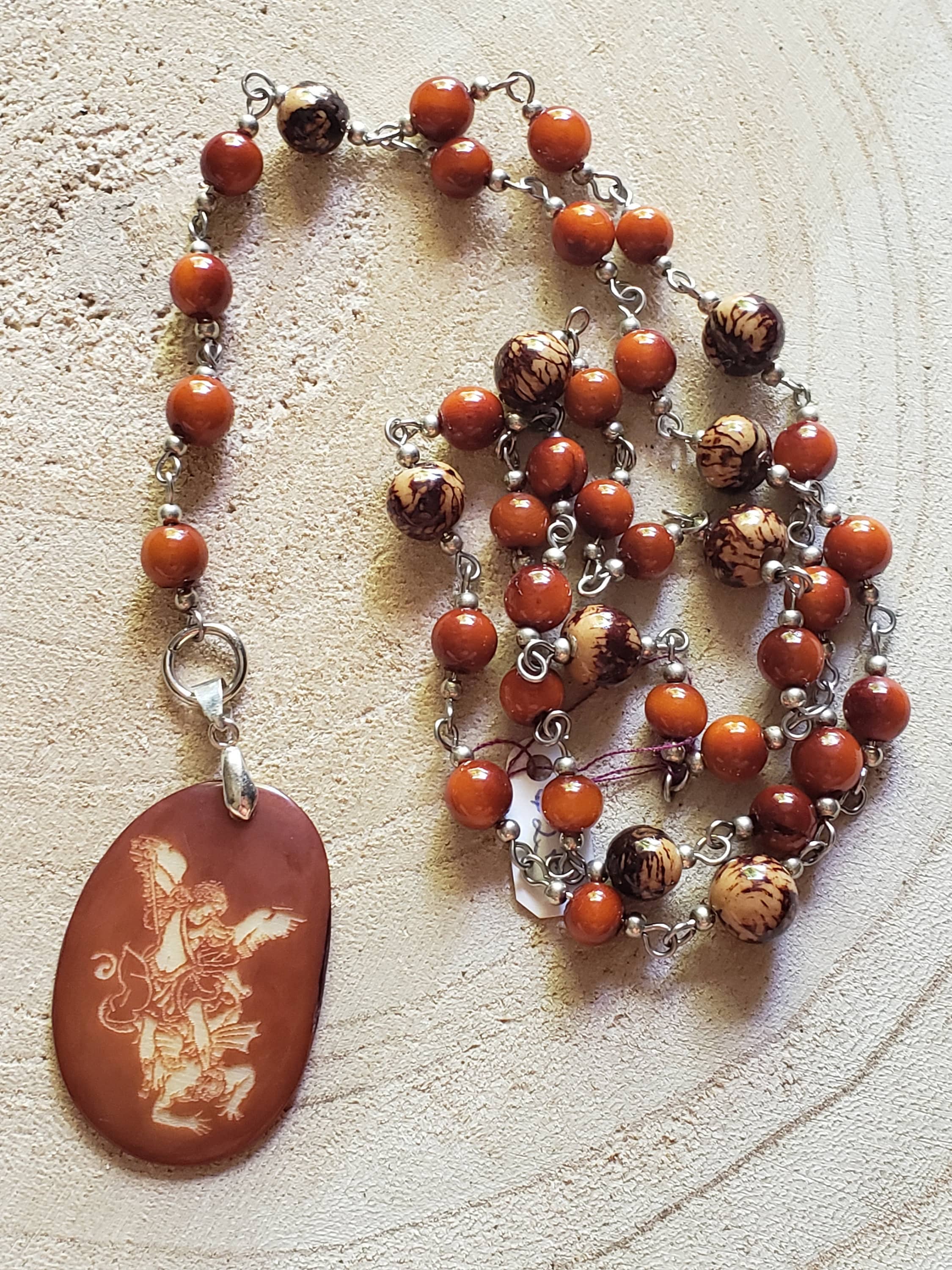 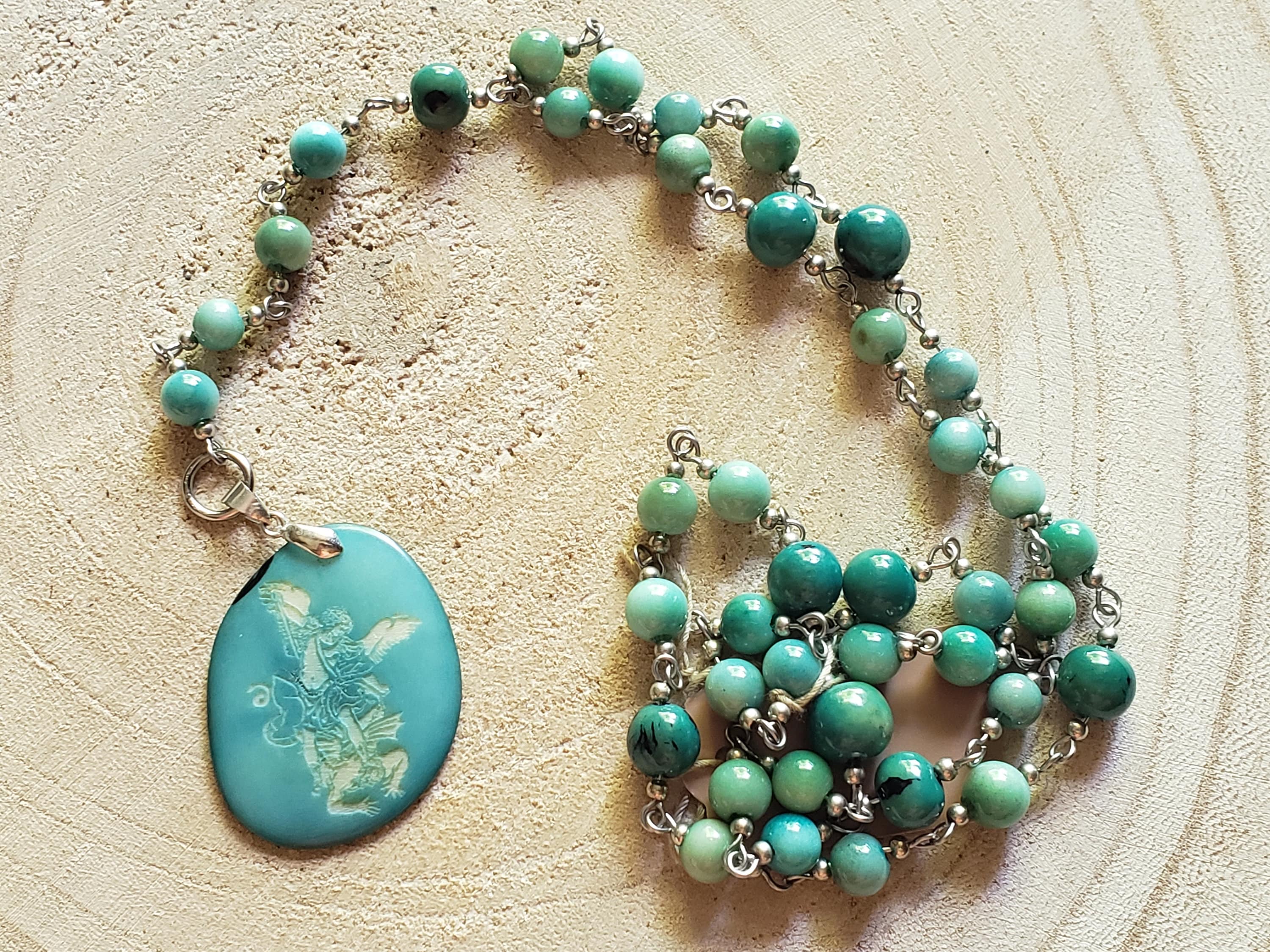 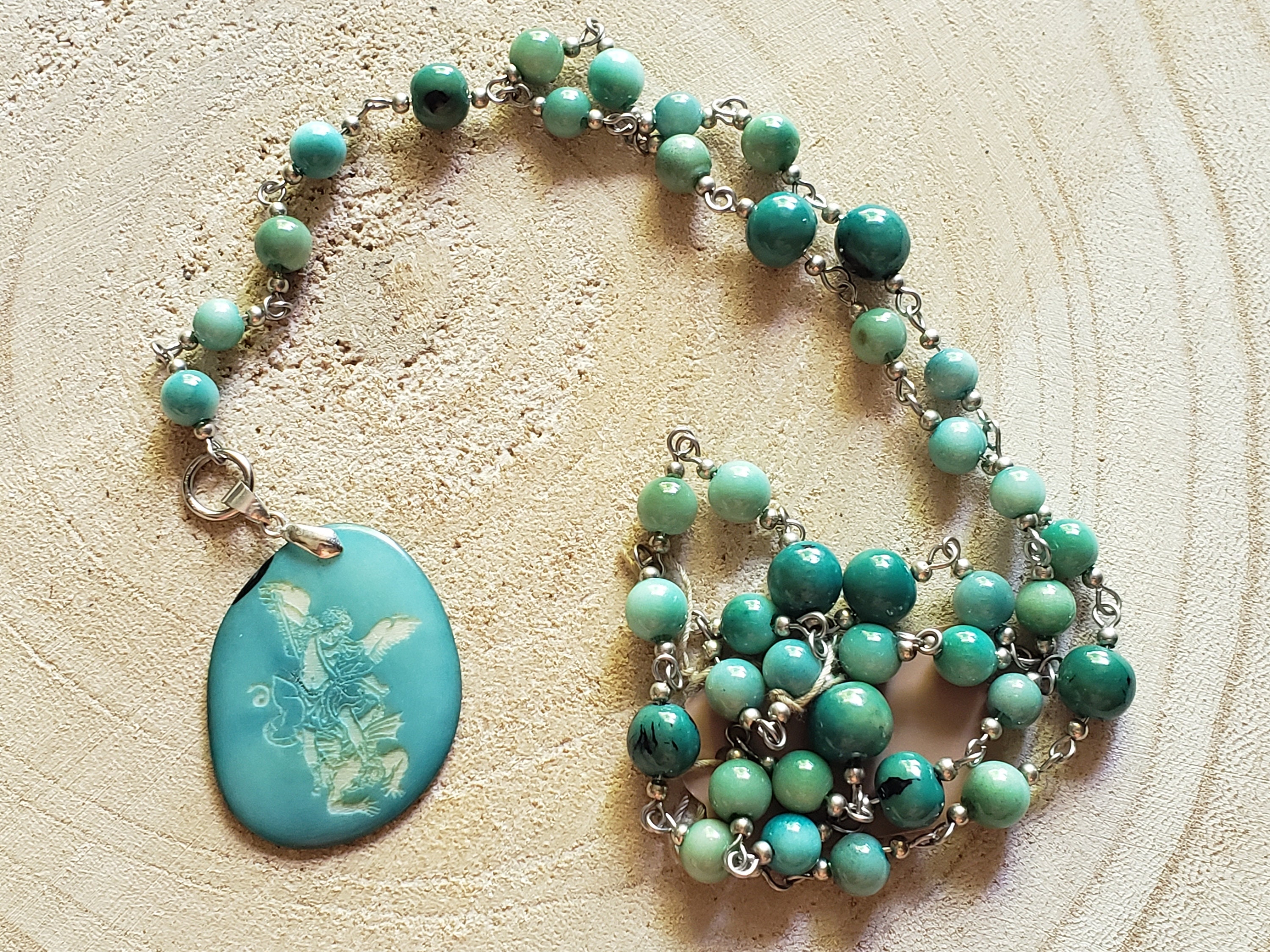 The Chaplet of St. Michael the Archangel is a chaplet resulting from a private revelation by the Archangel Michael to the Portuguese Carmelite nun Antónia d'Astónaco. It was approved by Pope Pius IX in 1851 and was granted indulgences.

MATERIALS
The Chaplet of Saint Michael Archangel is also known as the Rosary of the Angels. I am an eco-friendly designer, so my chaplet is handmade in tagua nut tiny pearls, and acai berry pearls wired or wire link in alpaca silver metal and the medallion is a tagua nut slice engraved in our workshop, with the Image of Saint Michael the Archangel defeating evil instead of the crucifix seen in the traditional rosary.

LENGTH:
With more beads than the traditional rosary, if worn as a necklace is long, hits a chest level.

HOW TO USE THIS ROSARY:
Praying the chaplet is basically like praying the rosary, but instead of 5 divisions with 10 Hail Maries, this has 9 divisions representing the 9 choirs of Angels, with 3 Hail Maries and the separating bead between each division is for the Holy father. The 4 beads at the beginning is for a Holy Father or salutation to each one of the Bible Angels;
1. Guardian Angel, 2.Angel Gabriel, 3. Angel Rafael and 4. Saint Michael Archangel . The chaplet has to be concluded with a pray to Saint Michael Archangel, asking him to deliver us from evil.

PROMISES OF THE DEVOTION:
Saint Michael the Archangel promised in the visions to Nun Antonia, for those who would recite the Chaplet daily, his continual assistance and that of all the holy angels during life. Praying the chaplet is also believed gradually to defeat demons and grant a Pure Heart thus delivering from Purgatory. These blessings extend to the direct family.

This chaplet is so beautiful and can be wear as a long necklace. My religious collection is called "TRULY Religious" and is selling in many CA Missions and also in many gift shops in Las Vegas, Nevada.

PRAYER TO SAINT MICHAEL ARCHANGEL
Saint Michael, the Archangel, defend us in battle. Be our safeguard against the wickedness and snares of the devil. May God rebuke him, we humbly pray, and fo you, O prince of heavenly host, by the power of God,cast into hell Satan and all the evil spirits who wander throught the world seeking the ruion of souls. Amen

CARE OF THIS ROSARY:
Alpaca silver is Zinc,Copper, Nickel and Silver alloy. This metal is similar to Stainless Steel,but more flexible and will not rust. Is very easy to clean, just wipe it with the silver cleaner cloth. Alpaca has lower percent of silver content and higher content of the other mentioned metals, when silver contains an alloy more than 7.5% of other metals is considered alpaca silver.

I'll do my best to meet these shipping estimates, but can't guarantee them. Actual delivery time will depend on the shipping method you choose.

I gladly accept returns and cancellations

Ship items back to me within: 14 days of delivery

Request a cancellation within: 6 hours of purchase

But please contact me if you have any problems with your order.

The following items can't be returned or exchanged

Because of the nature of these items, unless they arrive damaged or defective, I can't accept returns for:

Organic Jewelry by Allie web site or shop has a Blog section giving you tips about how to take care of your tagua jewels.

Contact us trough our message center in ETSY for wholesale inquires

Love it !! Very well made and beautiful

0 items in your cart